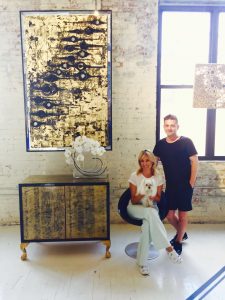 I wanted to bring back the vibe and creative energy from when SoHo was the
center of the New York art scene… when rock musicians mixed with artists,
and their work influenced each other. Alice McLaughlin

Alice plans to do more pop–up galleries across the US wherever there is a need to profile provocative collaborations in the Arts. She will also open a permanent gallery, Alice McLaughlin Fine Art, in West Palm Beach, FL, in the Fall of this year.

Alice McLaughlin is the founder of Art by Alicia, Inc., a firm that represents and promotes over 300 fine artists from over 30 countries. Discovery Familia will be launching Alice’s reality television series, Arte y Fortuna, in Fall 2016. www.framesfortune.com

Kristof Galas is a New York based artist who was born in Poland. Galas received his BA in Architectural Design from the Chelsea College of Art & Design, University of the Arts, London. Galas has been featured at Art Basel Miami and The Architectural Digest Show in New York. His commissions include a Peter Marino Architectural Firm installation series for the CHANEL and Dior boutiques. www.kristofgalas.com